What to Look for in the Latest Round of BBNJ Negotiations

The international ocean community is converging at the UN headquarters August 19-30 for yet another round of negotiations on the treaty on the conservation and sustainable use of marine biodiversity of areas beyond national jurisdiction (BBNJ). While expectations are high that countries will adopt the treaty by 2020, finding common ground between competing principles remains challenging for negotiators.

The last session of the Intergovernmental Conference (IGC) in April exposed a multitude of opposing views on different elements of the proposed treaty. Here is a closer look at issues that will need to be addressed in this IGC session to finalize the agreement by 2020.

The negotiations on BBNJ started in late 2018, after an intensive 14-year discussion involving an Ad Hoc Open-ended Informal Working Group (WG) and a Preparatory Committee at the UN. The BBNJ would apply to all waters outside of Exclusive Economic Zones. Data from Flanders Marine Institute, accessed via Resource Watch. 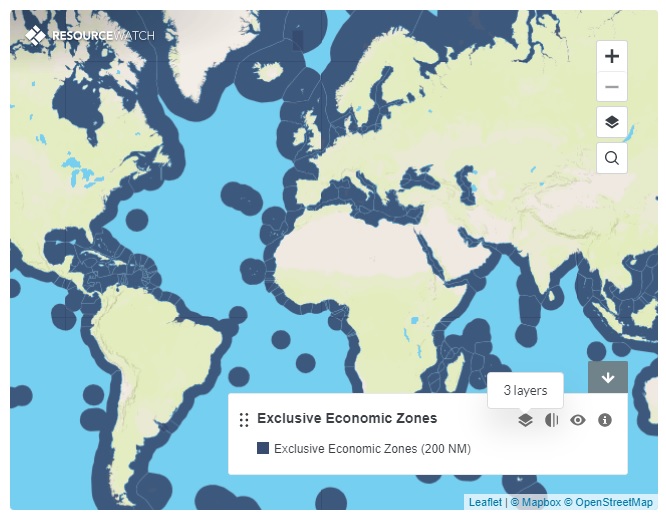 •      Which types of access to MGRs should be part of the material scope of the agreement (in situ, or collecting organisms from natural habitat; ex situ, cultivation of stocks in lab; and/or in silico, research performed on computer/computer simulation);

•      Whether the material scope should cover digital sequencing information and derivatives;

•      Whether/how to regulate access to MGRs in relation to the promotion of marine scientific research;

•      Whether the agreement should address intellectual property rights; and

•      Standards and criteria for the establishment of ABMTs;

•      Modalities for scientific assessments of ABMTs;

•      Modalities for relationships with different instruments;

•      Whether monitoring and review will be taken on by global or regional bodies;

•      Whether socio-economic/cultural impacts should be included in environmental impact assessments;

•      How/whether to evaluate compliance; and

•      Whether the involvement of adjacent coastal states should be considered.

•      Whether CB&TT should be voluntary or mandatory;

•      Whether the clearing house mechanism should be global, or include regional or other components;

•      Whether/how to consider the relationship between CB&TT and intellectual property rights; and

•      Whether/how to establish a funding mechanism.

It is significant to point out that most of these divergent areas result from core disagreement on the overarching principles to govern the future BBNJ agreement, in particular the applicability of the principles of common heritage of making and the freedom of the high seas. This is predominantly noticeable in the MGRs discussions, where there is a clear division of views connected to the preferences on principles. To put it simply, where preference for the freedom of the high seas is expressed as unimpeded access to MGRs and voluntary, non-monetary benefit-sharing is preferred; where preference for the common heritage of mankind is expressed as the need for oversight on access to MGR and standardized, mandatory and monetary benefit-sharing is favored.

Negotiation experts are confident that opposing positions regarding technical parts of the agreement, such as the ones listed under ABMTs, can easily be overcome through further discussions and compromises. However, the disagreements on core principles, approaches and scope threaten to paralyze and delay the process, as these disputes will be far more difficult to resolve. As such, consensus can only be developed in the leeway between both principles.

As the next-to-last IGC session before a final decision is made on whether to adopt a new agreement on BBNJ or continue negotiations beyond 2020, and as the first IGC session where a draft text is available, let us hope that this round of negotiations can build some bridges between divergent views.  After all, the conservation and sustainable use of more than 60% of the ocean is at stake.