3 ways we are making an impact on plastic pollution

We’re close to completing a blueprint to tackle the plastic pollution crisis in our oceans. 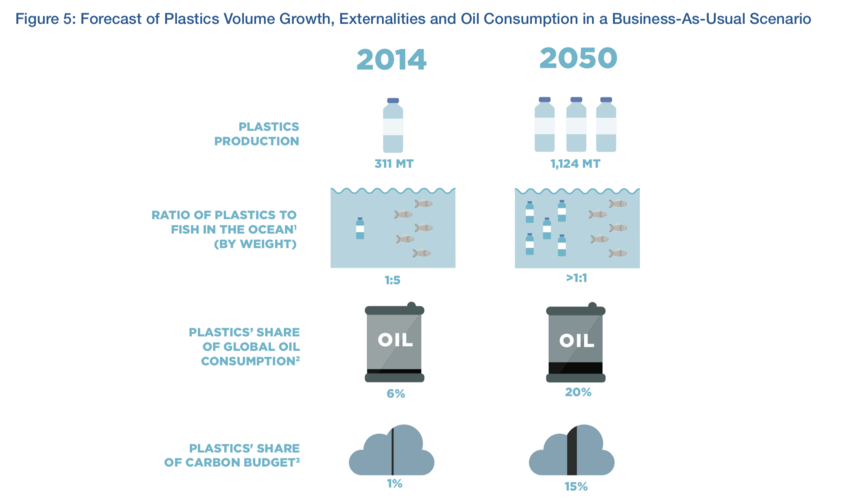 By now you’ve likely heard this harrowing statistic: by 2050, there will be more plastic in the ocean than fish.

While that data point is often cited to elicit a sense of doom and gloom, it actually comes with a silver lining. We’re close to completing a blueprint to effectively tackle the plastic pollution crisis in our oceans and communities – and we’re piloting the approach in a few locations to test it and learn from it.

Exactly one year ago, a group of the world’s most influential business leaders, policymakers, environmental experts and civil society advocates came together at the World Economic Forum’s 2018 Sustainable Development Impact summit for a frank discussion on this issue. Everyone agreed that plastic waste and pollution had become a global crisis we could no longer ignore. More importantly, everyone recognized it was time to turn promises and platitudes into concrete and swift action – and to create a unified platform to drive and amplify this action at an unprecedented level. Thus, the Global Plastic Action Partnership (GPAP) was born.

GPAP has now been in operation for a year. During this time, we’ve officially kicked off one national partnership and laid the groundwork for launching two more. We have experienced remarkable success, navigated unique challenges and forged powerful alliances, with much more to come. Here are three key takeaways from our first year.

1. Companies have a huge role in transforming the way we use plastics. Many are stepping up to shoulder this responsibility

When plastic production sky-rocketed in the early 2000s, so did single-use plastic packaging, and – as a result – mismanaged plastic waste. The world currently generates 300 million tonnes of plastic waste each year, without the capacity, infrastructure and collective willpower needed to sustainably manage it. It’s no surprise then that 8 million tonnes of plastic waste flow into the ocean annually, while mismanaged waste remaining on land can trigger public health crises among vulnerable communities.

Recognizing the extent to which their products have contributed to the ballooning plastic pollution crisis, many of the world’s leading companies are pledging to do better. Four of GPAP’s founding partners – Coca-Cola, PepsiCo, Dow, and Nestlé – are pivoting towards more sustainable ways of doing business. Coca-Cola has pledged to adopt 100% recyclable packaging by 2025, for instance, while Dow is financing waste management initiatives aiming to reduce total global plastic leakage by 45%.

They are in good company. Increasingly, businesses are recognizing the untenable costs of plastic pollution on human potential, environmental health and economic development. Marriott International, the world’s largest hotel chain, recently announced it would stop supplying plastic toiletries to guests by 2020. Amazon committed to eliminating single-use plastic packaging across its operations in India.

There is no shortage of innovation and entrepreneurship when it comes to tackling plastic waste and pollution. Part of GPAP’s value as a platform will be to play matchmaker between those who are pioneering successful initiatives on the ground and those eager to invest in projects for social good.

In March, we met a major milestone: Indonesia became the first country to officially sign on as a national partner. It was a powerful gesture in more ways than one. As the world’s second-largest contributor to plastic pollution in oceans, Indonesia has the potential to drive unparalleled progress and fundamentally strengthen the protection of marine biodiversity across Southeast Asia.

The government of Indonesia readily answered this call by committing to several ambitious targets, including reducing 70% of its marine debris by 2025. The impetus behind this commitment has allowed us to move forward quickly and efficiently. Working closely with local partners, we are delivering a comprehensive analysis of the plastics landscape in Indonesia, which will be followed by a national action plan composed of policy recommendations and necessary steps to achieve this goal.

On 1 October, we will formally launch our first engagement in Africa: a partnership with the government of Ghana. The country’s dizzying economic growth has come at the expense of unsustainable plastic pollution and mismanaged waste, but it has also shown exceptional leadership and resolve to catalyze a new era of plastic management across West Africa. In Ghana, we will support local government bodies, entrepreneurs and civil society leaders in exchanging practical knowledge and scaling successful local projects to the national level.

And in November, we will launch our third national partnership with the government of Viet Nam, which will assume chairmanship of ASEAN next year, through supporting its efforts to spark plastic action nationally and across the broader region.

3. Ultimately, we need to revolutionize the way plastics are made, consumed and re-used

All of our projects are underpinned by a fundamental truth: to finally put an end to plastic pollution, we must first address the issue of mismanaged plastic waste. Plastic packaging, for example, comprises 40% of global plastic production – a staggering 161 million tonnes of bottles, bags, takeaway boxes and other materials created for what is likely a single use. But what if we could save these materials from disintegrating in oceans and landfills? What if there were a way to breathe new life and value into single-use plastics?

Under a new plastics economy, we’ll be able to achieve exactly that. GPAP is working with governments, businesses and civil society to champion the transition to a circular economy model for plastic production. Essentially, this means we will drive progress on four different fronts.

Manufacturers will adopt innovative packaging materials designed with sustainability in mind. Consumers will be empowered to reuse, recycle or compost plastic products after initial use. Waste management facilities, such as recycling plants, will grow exponentially in both number and capacity to keep up with current levels of plastic waste.

And throughout this cycle, policymakers and experts will develop data-driven solutions and evaluate progress while we facilitate the sharing of practical knowledge across borders and sectors – taking us all one step closer to a world free of plastic waste and pollution.

Our work to close the loop on plastics has just begun.